QuakeCon 2021 is coming real soon, and ahead of the now-digital event kicking off, Bethesda has released a schedule that hints MachineGames could be working on Quake.

This year’s QuakeCon will not take place at its usual spot in Dallas. Instead, it's going to be a digital-only affair called QuakeCon at Home, and it's back on August 19 (with the whole thing set to wrap up on August 21).

During the event, you can expect livestreams featuring updates on existing and upcoming games, tournaments, charity fundraising, puppies, giveaways, and more besides. But today, as per a specific and updated schedule courtesy of Bethesda, it looks like we could be getting something else, too: a possible Quake project from MachineGames. 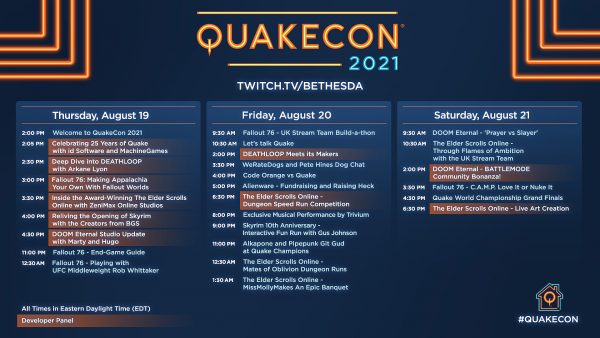 Most of the big-ticket events are taking place on the first day, per the schedule above, and one of them, in particular, stands out the most:  a Quake 25th anniversary panel with id Software and Wolfenstein developer MachineGames.

Could it be that a Quake project from MachineGames is currently in development? The studio has been working on something since Wolfenstein: Youngblood launched in 2019. We know it's a got a mysterious Indiana Jones game up its sleeve – but could it be hiding something Quake-y up the other one?

QuakeCon events have in recent years evolved to include much more than id Software’s games. The show essentially became Bethesda’s second E3, and the company took advantage of that to show off Elder Scrolls Online and Fallout 76 content, and even share news about Arkane’s games in the past.

We don't have too long to wait to find out, given that QuakeCon 2021 kicks off at about this time next week.

We've copied the full schedule for you below if you don't want to deal with the text in the image.